skip to main | skip to sidebar

Which Matters More -- Type or Amount of Scaffolding? 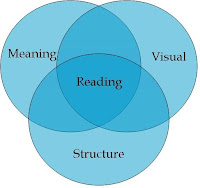 The answer might surprise you. In an article in the March/April issue of The Reading Teacher, Emily Rodgers describes her study of 10 Reading Recovery teachers and the level and type of scaffolding they provided students as they read. They separated the teachers into two groups – teachers who tended to have results above the national average for Reading Recovery and teachers who tended to have results below the national average.  To assess the level of support they evaluated teachers’ use of Wood’s (2003) tutoring rule: “When the learner runs into difficulty, the teacher should increase the amount of help provided, and when the learner experiences, success, the teacher should decrease the amount of help” (Rodgers, 2017, p. 527).  Rodgers found that there was no significant difference between the two groups of teachers. All teachers adjusted the level of their instruction appropriately about 61% of the time.

Rodgers did, however, find a very significant difference between the two groups of teachers regarding type of support they provided. Students (and all readers, for that matter) use three cueing systems as they read: meaning, structure, and visual cues . Proficient readers simultaneously use multiple cues, while struggling readers tend to overuse one or two cues, often due to the instruction they’ve received (Schwartz, 2005).

Rodgers found that high-performing teachers were eight times more likely to intentionally vary the type of support they gave in response to students by prompting them to use the missing cueing system. In other words, if a student over-relied on meaning cues (by misreading pony for horse or swing for playground) then these teachers prompted them to use more visual cues. If the reader overused visual cues (by saying visually similar nonsense words such as payund for playground, for instance) then the teachers prompted them to attend to meaning. This attention to the readers’ MSV errors and intentionality about their teaching response resulted in much higher success for students.

It seems simple, right? Simply notice what the student is not doing, and prompt them to do it. But Rodgers cautions that we tend to find our “favorite” prompts and reuse them over and over again without regard to the child in front of us.

She also cautions that just because there wasn’t a significant difference between the amount of support provided by the two groups of teachers doesn’t mean that we should stop adjusting how much support we give. All students in the study made some progress, and that could have been due to the teachers’ varying amount of support. Of course, if we don’t vary how much support we give, we will likely cause frustration in the student, which can be detrimental.

I found this interesting, because I’ve written before  about amount and type of teacher scaffolding, but this study forwards the notion that tailoring our prompts for students to the quality of their miscues is by far the more important to attend to.

What about you? Does this change your thoughts about how you confer with your students? Or how you work with small groups of students? Leave your thoughts in the comments below.
Posted by Heather at 3:28 PM

Heather
I am a NBCT and instructional coach at a high-poverty (99%), high ESL (99%) elementary school in the USA. Every day I hope to be always coaching, teaching, and learning.